Ok, here it is. Actually I don't have the rights to put my graduation film online. Hopefully it'll be screened on some festivals.

Anyway, here's a 30 seconds trailer I made to give an idea what it's about:

In a nutshell, it's a story of Russian sailor that comes back to his town because he left there a girl. And when he steps out on earth, he realizes that he can't stay straight. And his adventures start.

I don't know how it's better to translate the title in English. Sea legs?

From the beginning I wanted to make this film again in paper cut-out technique but I changed my point of view in the very last moment. Because I was afraid to repeat myself. And I also wanted to step out from my comfort zone. It seemed to me as well that drawn animation could help me to play more with sailor's body and make it really flexible.

So I stopped on tvpaint. And then I regretted many times, especially when I started cleaning and inking. It was a real hell to color all the stripes. When I got it, it was too late to change anything. Now I'm really well trained to make straight lines, ha ha!

I also want to thank all people who helped me to color all endless scenes! That all are credited in titles but I would put their names here as well cause they really deserved it!

And also Rocio and Stephane!

And now some images of the process. From the very beginning (october 2011). I didn't post them while working on the film. So now I'm showing them all together:

This was the first definitive background I drew but this scene was thrown away while editing. 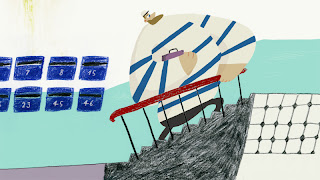 
In july I graduated from La Poudriere and here is my freshly fresh showreel filled up with pieces of my last films (graduation film included!).

Anyway soon I'll do one more post to tell more about my graduation film.
+ 11:40 AM No comments: